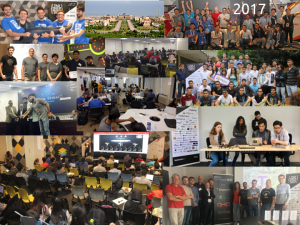 TADHack has grown yet again, with over 3300 registrations, quite a few locations had close to 300, and of course TADHack Sri Lanka leads the pack 🙂 On the second TADHack global weekend there were close to 80 hacks created from around the world. The locations running on 29 Sept – 1 Oct were: Sri Lanka, Pune, Athens, London, Lusaka, Madrid (29/30 Sept), Paris, Popayán, and Singapore. We do not have space to list out all the hacks created, we’ll link to weblogs that do deeper dives into individual locations, like TADHack Chicago, TADHack London, TADHack ANZ. This weblog summarizes the winners from the second weekend (both local and global prizes that were announced on Monday 2nd Oct). Winners from Weekend 1 are reviewed here.

I’m asked on occasion why I use such an unfashionable word as telecoms in TADHack. A common quote is “that word is old-school, complex, irrelevant, puts off developers, I hate my telco.” Alternative suggestions include communications, cloud communications, real time communications. Which are all euphemisms for telecoms, by people that simply can not bring themselves to use the t-word. I covered this topic in my welcome address at TADHack Global 2015. Telecoms is a broad term that captures the essence of the angle from which TADHack views the world. Telecoms is hard, its powerful, it connects people and things. We purposefully and proudly use the t-word as its defined: telecoms the transmission of information, as words, sounds, or images, usually over great distances, in the form of electromagnetic signals, as by telegraph, telephone, radio, television or internet.

Telecoms (phone and exchanges) came into existent back in the 1870s, based on the work dating back to the 1840s, of many, many individuals. Small companies built local telephone businesses town by town, as it became popular and strategically important, regulators got involved and with consolidation telcos, carriers, network operators, cable cos came into existance. Programmable telecoms has democratizes telecoms so individuals and small companies are again empowered. We’ve come full circle, and as Craig Walker’s keynote highlighted is a great time to be in this business.

To be fair when people complain about the t-word, they are also pointing out that TADHack is so much more than telecoms. Its a global event focused on helping people solve problems that matter to them in the lives and local local community. I’m open to all suggestions on how we capture this aspect, we’re an open community at TADHack.

So onto review the weekend #2 winners.

Athens run by Barphone and Telestax

London run in cooperation with UCL and Ideal London

PhoneGuard used Apifonica by Ousama, Michael, Mark. A system for charging unsolicited callers a fee to call you, solving one of the ideas proposed by Dean Bubley. Apifonica global winner.

state of the chart by Emma, Gareth, Robert used Matrix and Vidyo. A tool for remote design meetings. Web based video calling with the ability to covert pen-on-paper sketches to shared click-and-dragable drawings. Won the location prize as well as Vidyo global winner.

Pushtime by Aviral used Matrix. Syncs your phone to your computer over the secure, end-to-end encrypted Matrix protocol, using an Android app on one end and a Chrome extension on the other. It works cross platform, and with multiple devices at the same time too! Won the location prize as well as Matrix global winner.

Culturoo by Gladwin, Chris, Awais, Jardin, Immaneul used Apifonica and Matrix A web calling platform that promotes cultural learning through compelling suggestions for communication. This was the first hackathon for many of the team, and they won the location prize, and here is a write-up of their experiences.

Rome by Steven and Lily Madar used Apifonica. “Reach me anywhere” – A way of contacting someone, in a variety of ways, depending on the time of day. Apifonica global winner.

GrowApps – Triton by Washington, Andres, Rosa used Apifonica, Matrix, Telestax, Temasys. Emergency SMS Notification Service, our application would be connected to governmental monitoring services of natural disasters, as earthquakes, volcano eruptions or tsunamis, and when one of this events happens, an automated message including the GPS location is sent to a trustee contact of our registered users. Won location first prize,  Matrix and Temasys global winners.

Project Almanzor by José Antonio,
Víctor used Apifonica and Temasys. Our hack provides the necessary link between the patient and the doctor with a flawlessly experience. For that we are using . Won location third prize

DoctorNowTeam by Fabian, Camilo, Manuel, Javier using Temasys. Delay in appointment management with medical specialists in remote zones, it’s a web platform that allows to connect patients with specialists, It uses Temasys for video calls and messaging for communication in order to facilitate communication from remote or rural places to provide health services, through telehealth. Won Location Prize.

GYDme by Nipuna, Sajidh, Achira, Dulitha, Thishan. Guide me is a low cost, hassle free and on-demand replacement for regular tour guide to help travelers. Web Call Back API as been integrated but not end to end connectivity is established Won Location Prize third place.