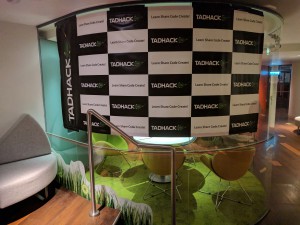 For TADHack Global’s second weekend, I ran TADHack London 2017 in cooperation with UCL and Idea London. London has been part of TADHack since 2015, where we’ve run global and mini events over the years. The themes I took from London this year are an impressive increase in hack quality, augmentation of conversations through the practical application of machine learning, and diversity (first time hackers, product/marketing/strategy people as part of the teams). TADHack continues to show programmable telecoms is a critical building block of solutions to real world problems. And the global sponsors make the hard stuff of telecoms much more easily accessible to all types of developers.

We added a challenges and ideas section to the developer resources this year. The ideas were from people that saw problems and hoped TADHack would deliver solutions. The sponsored challenge was provided by ArcFire, a geeky challenge, which really tested both the hackers and sponsor.

Another trend I saw this year, the sponsors were working hard all hours supporting the developers. Chip from Temasys was waking his people in the middle of the night to get answers. I’m not sure when Anna from Apifonica slept over the passed 2 weekends. Matrix, Telestax, and Vidyo were all there helping people create some of the highest quality hacks we’ve seen.

I review below the hacks and the prizes awarded across both local and global prizes (that were announced yesterday). We do the prizes in 2 phases as global sponsors can not be in all locations so we need people on the ground to make the informed decisions at the end of each event on which are the local prizes; and once all the hacks are in it gives the global sponsors a chance to recognize those hacks that just missed out on winning at a location, as well as adding prize money to hacks they consider deserve a greater reward. It delivers a more comprehensive recognition of everyone’s contributions.

So onto the London hacks:

One Vision used Temasys by Leslie, Mike, and Daniel. An application that supports Holistic self using Temasys. An original take on personal organization.  Apologies to the team, but I want to highlight this hack as an example of the high quality bar, where a hack this good just missed out on a prize.

PhoneGuard used Apifonica by Ousama, Michael, Mark. A system for charging unsolicited callers a fee to call you, solving one of the ideas proposed by Dean Bubley. Won the Apifonica global prize.

state of the chart by Emma, Gareth, Robert used Matrix and Vidyo. A tool for remote design meetings. Web based video calling with the ability to covert pen-on-paper sketches to shared click-and-dragable drawings. Won the location prize as well as Vidyo global prize.

Pushtime by Aviral used Matrix. Syncs your phone to your computer over the secure, end-to-end encrypted Matrix protocol, using an Android app on one end and a Chrome extension on the other. It works cross platform, and with multiple devices at the same time too! Won the location prize as well as Matrix global prize.

Culturoo by Gladwin, Chris, Awais, Jardin, Immaneul used Temasys and Vidyo.  A web calling platform that promotes cultural learning through compelling suggestions for communication. This was the first hackathon for many of the team, and they won the location prize, and here is a write-up of their experiences.

Rome by Steven and Lily Madar used Apifonica. “Reach me anywhere” – a way of contacting someone, in a variety of ways, depending on the time of day. Won the Apifonica global prize.

Thank you to everyone who took part. You can see all the pitches on the TADHack YouTube channel. To everyone who took part, especially those who did not win this time. Being a TADHack winner is just someone’s opinion. Its the market that decides if your idea is great. If you believe in your idea, make it happen and let the market decide. Ruwan from Extrogene (one of the keynotes this year) was a runner up, but he made his idea a commercial success. Please learn from TADHack, and come back next year to hopefully win. As a small business owner, I spend most of my time loosing / failing (not winning deals), but every now and then I win. Persistence pays in my experience. See you at TADHack Global 2018 on 13-14 October 2018.