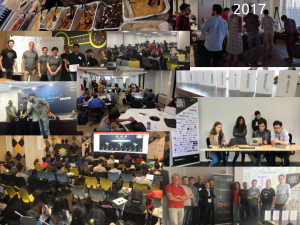 TADHack has grown yet again, with currently 3300 registrations, quite a few locations had close to 300, and of course TADHack Sri Lanka leads the pack 🙂 On the first TADHack global weekend there were close to 100 hacks created from around the world. The locations running on 23 – 24 September were: Auckland, Brisbane, Melbourne, Sydney, Islamabad its satellite Karachi, Kuala Lumpur, Kyiv, The Hague, Lagos, St Petersburg, Chicago, and Buenos Aires. We do not have space to list out all the hacks created, we’ll link to weblog that do deeper dives into individual locations, like TADHack Chicago.

To everyone who took part, especially those who did not win this time. Being a TADHack winner is just someone’s opinion. Its the market that decides if your idea is great. If you believe in your idea, make it happen and let the market decide. Ruwan from Extrogene (one of the keynotes this year) was a runner up, but he made his idea a commercial success. Please learn from TADHack, and come back next year to hopefully win. As a small business owner, I spend most of my time loosing / failing (not winning deals), but every now and then I win. Persistence pays in my experience.

Now onto the TADHack Global weekend 1 review. Weekend 2 is currently happening, and we’ll review the results of that next week.

Brisbane: Coffee Hackers used Matrix, Oracle Cloud Platform (Container Cloud, Application Cloud, Analytics Cloud) by Behnaz, Francois, Alexander. Intrusion detection system – when an attacker attempts a NoSQL-injection into the anki-medrec application our analysis* reports these incidents to a pre-configured Matrix room. Security analysts are alerted in real time (we use the Riot clients for web and mobile for our demo) and can take immediate action. Based on meta-data about the attack that we embed in the Matrix messages, we can visualize attacks using an Oracle Data Visualization cloud application, again in real time. All components for publishing and processing analysis reports were built using the Matrix Node.js SDK.  Local honorable mention and Matrix global winners.

Sydney. ConnectRoo Used Apifonica and Telestax by Tobias. Data on Demand through Voice call or SMS, rural with little coverage, why? more service provided online, 4G coverage only in big cities, done some research on the Why they need this product, No website no device, First generation phone, Ask anything, No internet, APIFonica, Telestax – Voice Call, speech to text, Oracle Cloud (DBCS), Worked out the Costs, Freemium model, Deployment Model and roadmap. Won a local participation prize. Won a local participation prize.

SafePlace used Vidyo, Telestax, Apifonica, Dif-cam-engine for the motion detection by Martin, Bruno, Guillermo. Security system that detects motion using the camera and let know via sms and voice when there is some suspect movements. Won TADHack location prize and Vidyo global winner.

QrCall by Pedro, Rafael from TADHack Buenos Aires. System that allow to contact professionals without sharing private data such as phone numbers or email. It uses a personal card with a QR code that being scanned it triggers a WebRTC Call. Vidyo global winner.

Chicago run by IIT RTC Labs, Telnyx, Phaxio, you can read more about all the hacks here.

Project Sapphire Network used Telnyx by Pratik, Lucas Zhang, and Yani. It allow small businesses to manage inbound/outbound numbers through a mobile application without spending money on additional telephony hardware like VoIP phones. They won Telnyx location prize. One aspect that impressed the judges is they did market research of local businesses during the hackathon, and are hungry to make this a real service.

Islamabad run by NUST (National University for Science and Technology)

Moomble used Telestax by Hamza Zakir. Real time SMS converter to the language of your choice using Google and SMS APIs. Considering the significance of language barrier this solution converts SMS into the any desired language and send it to the recipient in his local language. It does not require a smart phone on both end as all the conversion and sending and receiving is done at server side. Won TADHack location prize.

Sahoolat used Telestax by Osama Arshad Dar, Shazab Naveed, Haider Ali. IVR based solution for the home maintenance. Using the Telestax IVR system a user can select plumber, Mechanic, Electretion etc near his vacinity. Also he can pick up a low cost handyman of his own choice. Won TADHack location prize.

Kyiv run by DataArt and IT Education Academy

Save Me used APifonica, Temasys by Orest, Nikita, Dmitry, Oleksii. “Save Me” will find somebody near you to help. Won TADHack location prize.

Foodger used Apifonica by Aleksandr, Maksim, Anton. IoT device that control a quantity of products in a kitchen and push notifications if a this quantity is critical. Won TADHack location prize.

Veripro used Apifonica, Telestax by Abd-afeez, Damilola, George. Fake consumeable products are rampant in african market and it had been a huge source of worrry as, various cases of death or injuries have been recorded from consuming such products. Veripro as a product focuses on solving the health challenges poised by these adulterated products by creating a simple tool that simplifies product authenticity check by consumers and yet creates a production track by the regulatory body of a country. The product exploits ussd as a gateway for the users hence ensuring more reach and avoiding internet concerns in this part of the world. Won TADHack location prize.

Med911 used Video by Babatunde, Dunsin. Our solution is a mobile app (Telemedic & USSD using vidyo.io and local Local telecom API) that allows junior health staff in rural clinic to make live video call to experienced specialist or senior doctors to seek assitance expecially in case of emergency. It also allows people in rural area book a request via USSD from their mobile phone to visiting doctors without the need of an internet connection. Won TADHack location prize.

CaRescue used Apifonica by Adedayo, Olukayode, Jonathan. CaRescue is a system developed to allow motorist in distress to connect to help or assistance nearest to their location, even in areas without data coverage. Won TADHack location prize.

Roogle by Emmanuel. Roogle enables anyone with a phone of any type to make quick searches on Google via USSD. Won local USSD prize.