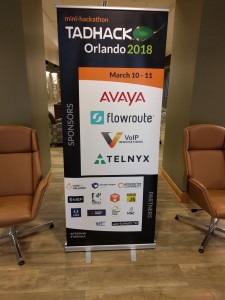 TADHack-mini Orlando 2018, held at Valencia College’s Collaborative Design Center, was roughly double the size of last year by number of developers on site, with close to 80 people over the 2 days. I limited the number of sponsors this year to ensure each sponsor would have at least 5 hacks on their technology, one managed 9. We had 14 teams create impressive innovations, and they wisely mashed-up the sponsors’ capabilities.  We run just before Enterprise Connect 2018, which allows the winners to present at EC18, and for EC18 attendees to see what is possible with programmable telecoms. Hopefully, inspiring them to solve problems in their businesses using using the sponsors’ platforms and services. I reviewed the all prize winners in this weblog, and you can see the prize awards at the end of this weblog. This TADHack-mini Orlando 2018 review considers all the hacks created, and explains the importance of TADHack to everyone involved.

I often have people write-off what we do at TADHack as, ‘its just a hackathon, there’s no money in that for us.’ They are wrong in a number of respects:

The sponsors Avaya / Zang.io, Flowroute, Telnyx and VoIP Innovations gained immense value in having their platform used by a diversity of people. They now have compelling original content, and at EC18 were able to independently demonstrate the massive innovation potential of their platforms. You can see all the pitch videos, live streams and EC18 TADHack session content on the TADHack Orlando 2018 playlist.

Lissette, Carlos, and Guilermo used Flowroute to create their hack,  a mobile version of the game Cards Against Humanity. Players text PLAY to play a game with up to 3 players. The game assigns the Card Master role to a random player, the Card Players receive a random prompt and three response options each. The Card Master picks the winning response, the winner gets awarded a point and is the Card Master for the next round. Game ends when a Card Player scores 5 points or if they text RAGEQUIT (whereat the current points leader is announced to the players). Players can ask for the current score by texting SCORE. You can see their pitch video here and their slides here. 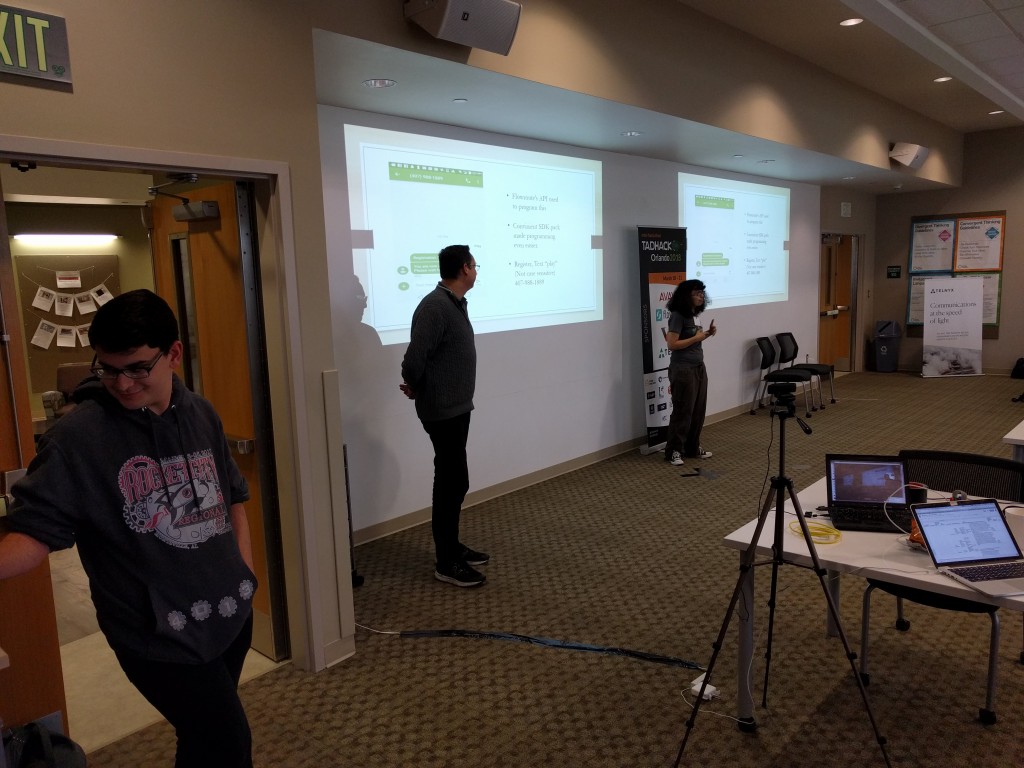 Deven and Jesse used Flowroute and Avaya / Zang to create a long distance Rock Papers Scissors game through SMS using a server to determine the winner. You can see their pitch video here and their slides here. 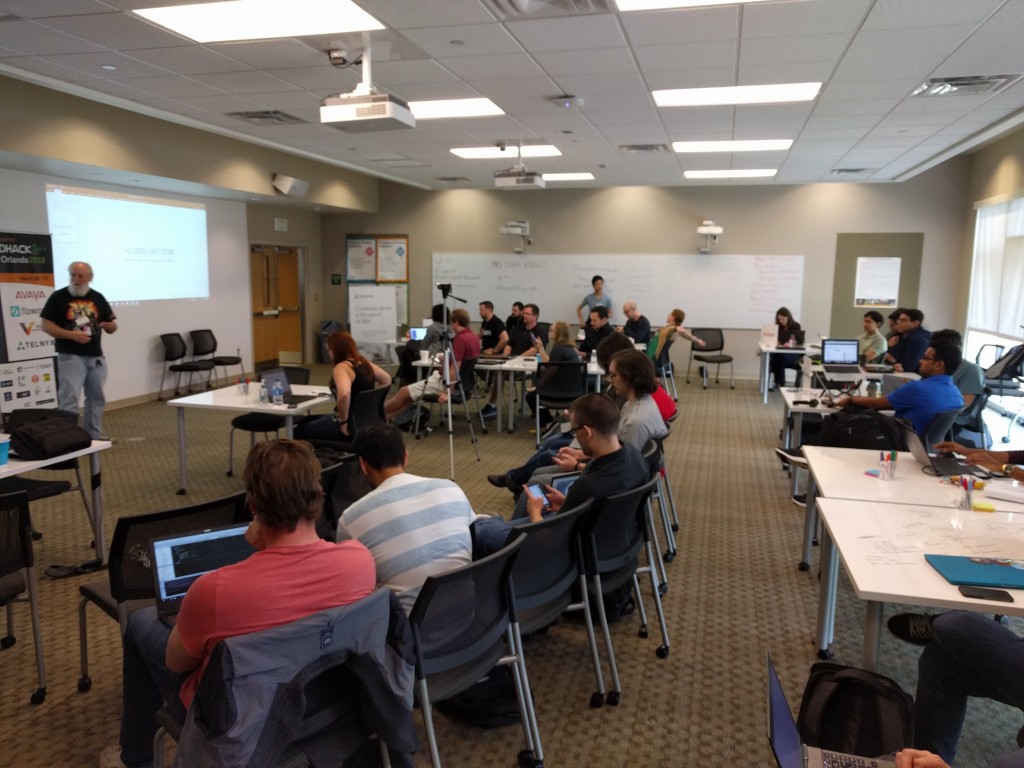 Bekir and Baris came all the way from Turkey and used Avaya / Zang to create a service to visualize voicemail via SMS. People with hearing disabilities or unavailable to listen their voicemails can benefit from this service. They are also attending EC18, and TADHack provided them with a chance to gain motivated hands-on experience, as nothing focuses the mind like having the present and demo in 24 hours 🙂 You can see their pitch video here and the slides here. 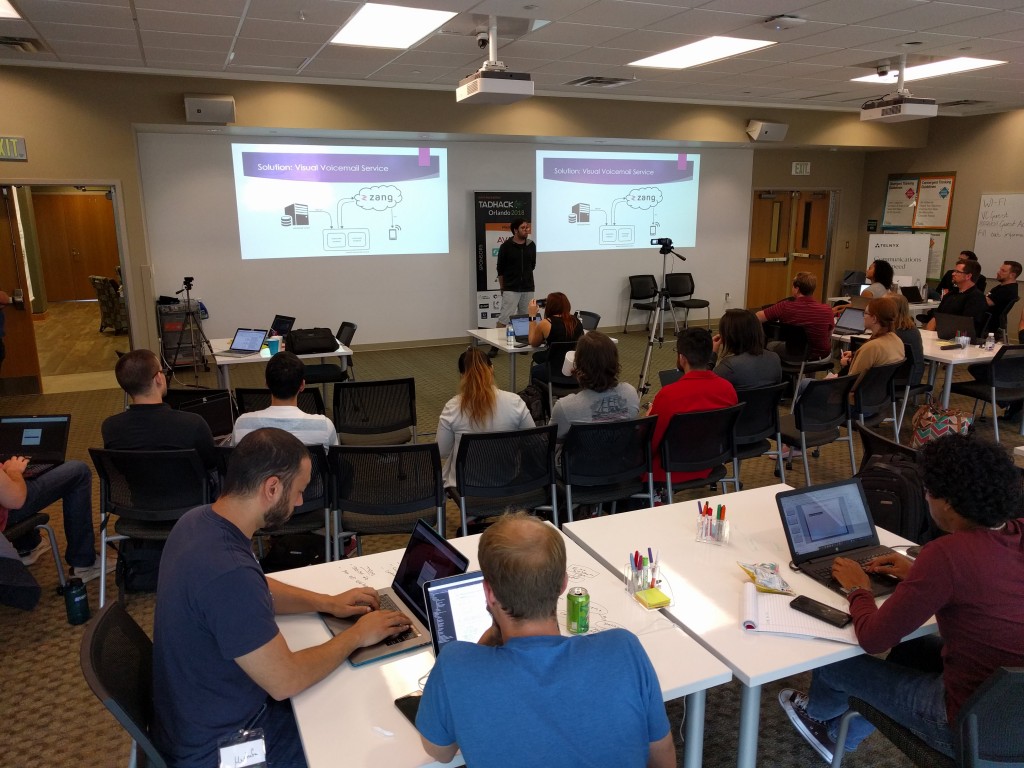 Eyuel  came all the way from Ethiopia and used Flowroute to create an appointment directory system that allows users to make appointments at hospitals, dentists, or different office using SMS. The system helps make quick appointments using text instead of waiting inline to get customer service or hear long automated customer service options. You can see his pitch video here and his slides here. 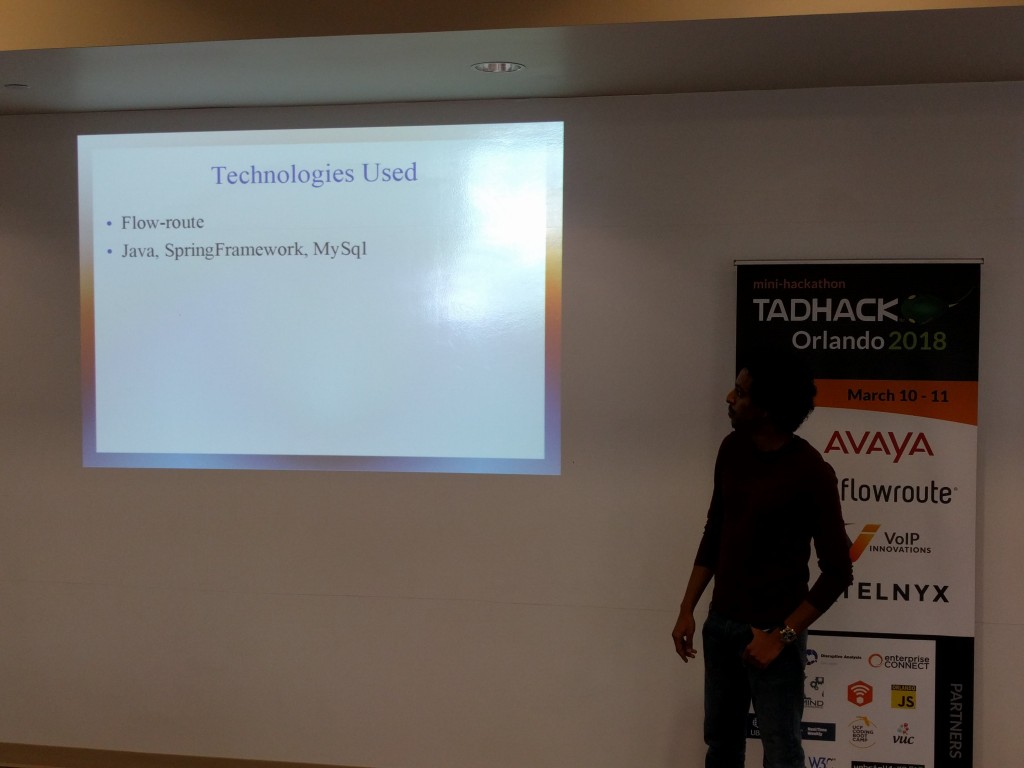 Nathalia used Telnyx and VoIP Innovations to create Running Memoir. We all want to read and write consistently, but the advent of smart phones have blocked our attention span. Transcribing long-form text on the go could record our history, and give us the raw material to flesh out our memoirs and writing ideas. Community applications could include contributing oral histories to institutions like the Orlando History Center. You can see her pitch video here and her slides here. 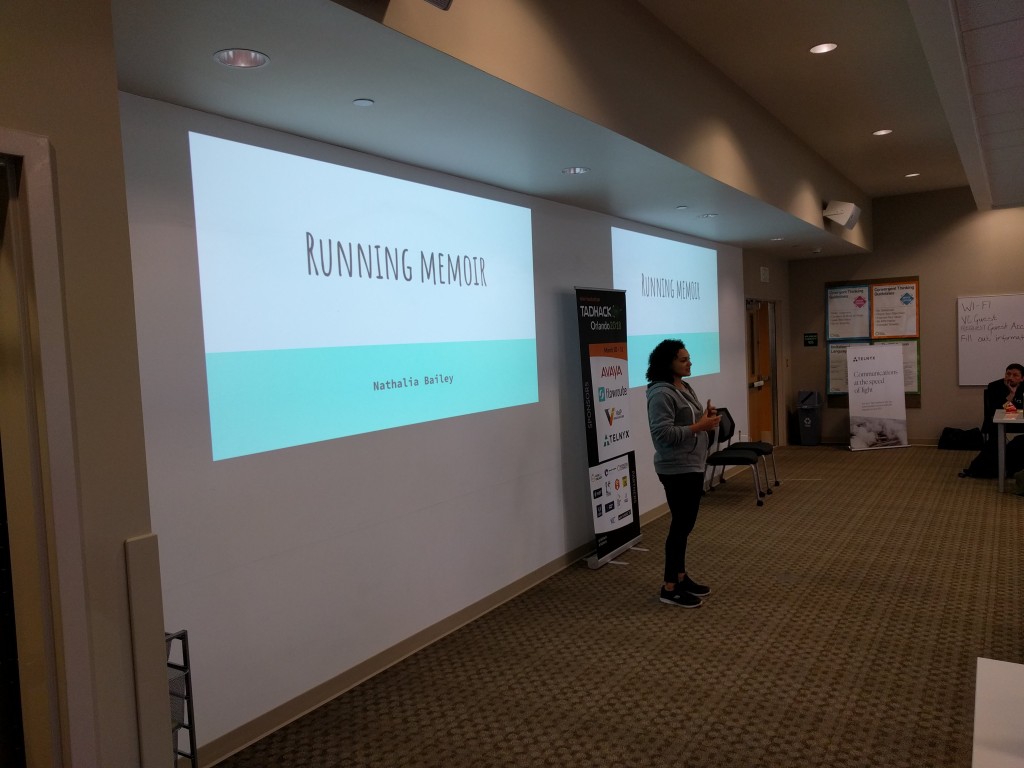 Utku (a winner from last year) was our only remote entry from Turkey. He used Flowroute to create Emergency Notification System (no time for fancy names) to the rescue! (using SMS of course!) Create your groups, manage group members, send your messages like never before! You can see his pitch video here and his slides here.

Myles and Mustafa created Third Party Verification System using Plivo, not a sponsor but we’re open at TADHack. Giving call centers the ability to update their 3rd party verification prompts on the fly rather than utilizing pre-existing archaic systems. Its a great hack and should be brought to market as soon as possible. They used Plivo as it met their specific needs. So come on Plivo stop ignoring my emails and get sponsoring TADHack Global! You can see their pitch video here. 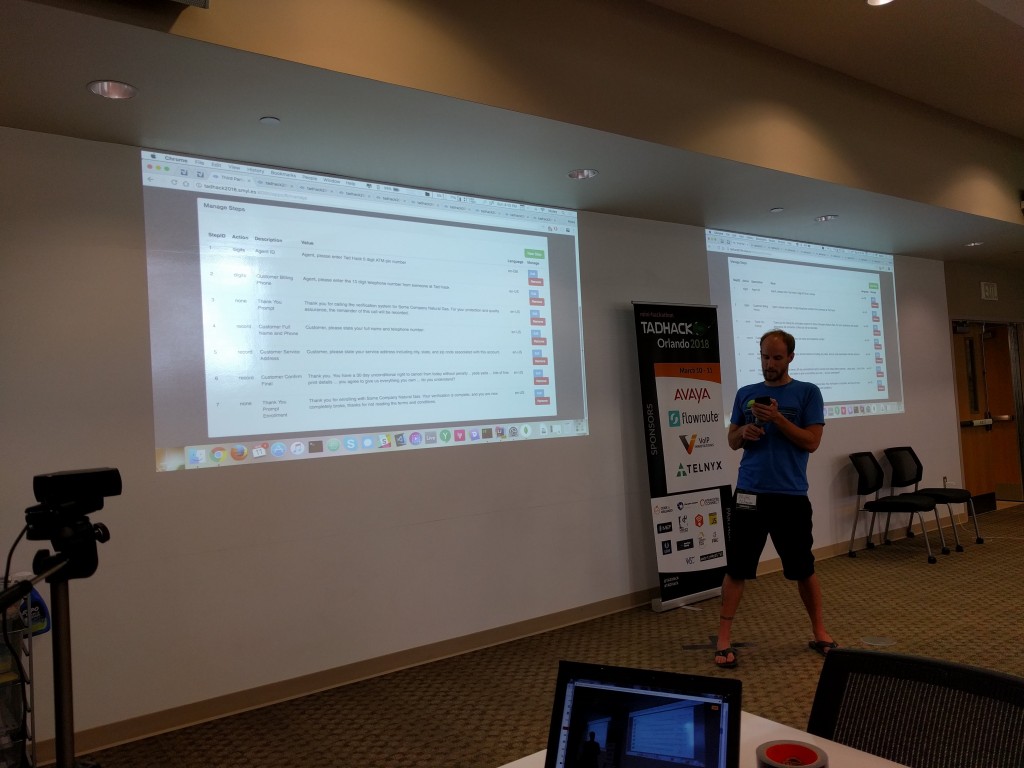 Holdr – cool innovation for being on hold with games and music