These days it is rare to find a hackathon where you can freely tinker around with your tools without worrying about a business case. With many corporates penetrating the scene, hackathons are become more and more like startup weekends in disguise.

Hackers are not Entrepreneurs

If we were to understand the original meaning of the term hacking we need to travel back in time to the late 1950s inside the trenches of the labs at MIT. The book hackers takes us on this journey back in time where the heroes of the book had never seen a computer in their lives, but were members of the Tech Model Rail Club (TMRC). These members spent most of their time tinkering and improving on railroad systems. The core members of the club were obsessed about improving the System to the extent that they developed a culture and a jargon of their own:

“When a piece of equipment wasn’t working, it was “losing”; when a piece of equipment was ruined, it was “munged” (Mash Until No Good); the two desks in the comer of the room were not called the office, but the “orifice”; one who insisted on studying for courses was a “tool”; garbage was called “cruft”; and a project undertaken or a product built not solely to fulfill some constructive goal, but with some wild pleasure taken in mere involvement, was called a “hack.” “

No matter how hard I try I will not be able to describe this art better than this excerpt from hackady:

“Hacking is an art form that uses something in a way in which it was not originally intended. This highly creative activity can be highly technical, simply clever, or both. Hackers bask in the glory of building it instead of buying it, repairing it rather than trashing it, and raiding their junk bins for new projects every time they can steal a few moments away.”

A hacker starts with a question such as can I make X do Y or would I be able to re-purpose this to do that?

On the other hand, an entrepreneur would start with an understanding of the market and segment it to understand his target user’s problems. Following that an s/he would develop feasible solutions to tackle this problem while keeping in mind a business model that allows his solution to generate appropriate revenue. While all of this is interesting it tends to distract one from the original hack in question. Many hack ideas would be disregarded along the way. They’re pointless from a business perspective but pleasurable from a hacking perspective.

“TADHack is a hackathon that helps people learn about the latest Internet, IT, and Telecoms technologies; and use those technologies to solve problems that matter.”

So it’s a hackathon related to anything telecommunications. I was skeptical about attending at first because I didn’t know much about telecoms and protocols. Eventually I decided that I have nothing better to do that weekend so why not just give it a shot.

I really wanted to get my hands dirty with some hardware for this one so I looked around my room to see what kind of tools I have available. Well I found a HackRF Software Defined Radio, A raspberry Pi kit — containing a bunch of drivers, displays and a breadboard, and an RC car. I always wanted to understand Radio Frequency (RF) so I decided why not decode the signal from my remote which controlled the car and see if I can regenerate this signal to control the car. Having watched Michael Ossoman’s series a while ago, this was my first practical project out of that tutorial.

Initially I wanted to connect the hackRF to the raspberry pi and use it to decode and send the signals, but I ran into problems with that so I ended up using my laptop instead. I installed GNU Radio on my laptop and followed a tutorial to decode the signal. I found that the toy car operated at a frequency of 40MHz so I listened at that signal and captured the signal being transmitted from the remote. I inspected that signal in Audacity and discovered that it was an on-off keying signal that relied on a sequence of amplitudes to send a sequence of 0’s and 1’s. 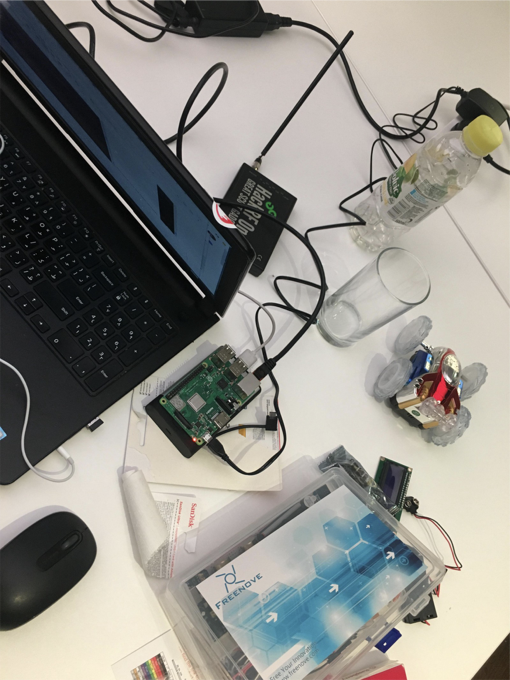 Next I decoded the signal in another flow graph and transmitted the digital signal to control the RC car. It took alot of attempts but eventually I got it to work. It worked for the forward button but I had trouble with the other 3 directions. Nevertheless it was exciting to see the wheels rotate as a result of my generated signal!

I had plans to do other things based on that such as record the directions in a smart contract (fictional use case), but I couldn’t get it done due to time. While this hack was pointless for many outsiders, it was really fun to work on and I learned a lot about radio waves in the process. After I built it I made up a fictional use case for it and pitched it on the final day. And the runner-up award goes to …

While I ended up not using any of the APIs of the sponsors due to the lack of time, I explained what I was planning to do with Status.im and smart contracts if I did have enough time.

Overall it was a very positive experience and I enjoyed the fact that we were free to build anything we wanted that utilised the technologies of the event sponsors. I look forward to attending TADHack in 2019 and I think you should too. Find out if they organise one in a city near you or even join online global hackathon from the comfort of your home.

TADHack-mini Orlando on the 16-17 March 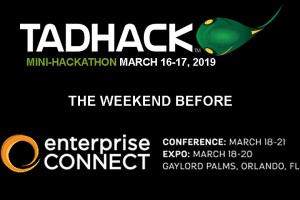