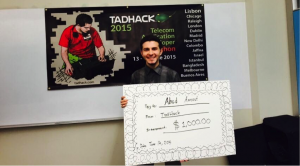 As a former TADHack attendee, I was looking forward to attending it again this year! Telecommunication app development is my favorite, its very exciting because its revolutionizing so many industries with on-demand services!

I showed up last weekend with no clear idea on what I will be doing during TADHack 2015. However, I was confident enough that I would come up with a unique idea because of the tremendous amount of available resources for hackers, the API provider representatives both onsite and remotely, the support from fellow hackers and event sponsors, and most importantly, the inspirational environment of hackathons where I see everyone around me hacking and innovating!

Carol Davids, Professor & Director RTC Lab at Illinois Institute of Technology, explained to us how the 9-1-1 system works today versus the future Next-Generation 9-1-1 (NG-911). That was the trigger for my idea BNG-911 (Before-Next-Generation 9-1-1). It was hard for me to believe that even though the future technology for advanced 9-1-1 services including text to 911 exists, it’s not quite yet implemented to be used in a meaningful way, and it may indeed take many years to install everywhere! That can impact the life of people in scenarios where they cannot call 911, and instead, they can only text. With more investigation on possible solutions that must be compatible with the way that 9-1-1 systems currently operate, I came up with my app idea BNG-911.

Telestax was the ideal platform to implement my web app in less than 24 hours. The tools developed by Telestax make it super easy and intuitive to develop telecommunication tools such as text, SIP calls, voice transcribe service, text-to-speech, and etc. Amit Bhayani was available on site in Chicago TADHack location to support hackers working with Telestax API like myself.

After several iterations on the app, I was able to have it fully functional by the presentation time. The hack was selected to win the TADHack Chicago prize of $1,000, and the pitch was live streamed to all remote locations around the globe!

I strongly recommend taking part in TADHack, its unlike any other hackathon you’ll attend. They are focused on helping developers be successful. See you at TADHack-mini Chicago on the 3/4 October as well as the IIT RTC Conference on the 6-8 October.