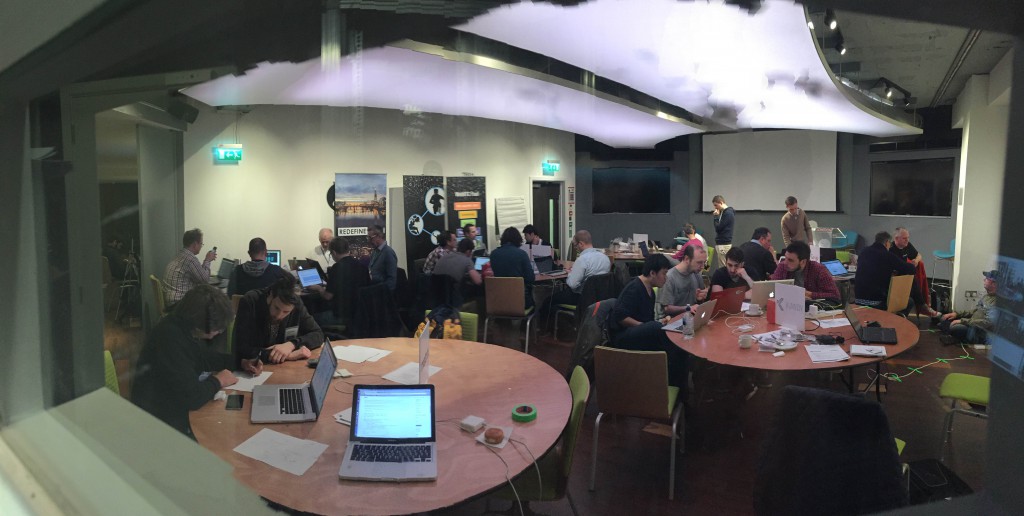 Thank you to everyone who was involved in making TADHack mini London an amazing event. We had 98 people registered both onsite and remote, and over the 2 days we had 70 people take part (both onsite and remote) generating 18 world-class hacks, which demonstrate the power of telecom application development: from controlling drones in the English countryside from the middle of London, through start-ups discovering they can extend their applications and services to any phone with a couple of hours of development, to innovative teaching applications using WebRTC.

This weblog described the last 6 pitches: Number Mapper by Sebastian Schumann, WebRTC Lights by Neil Stratford, Co-browsify by Žilvinas Ra?yla, Project Clearwater / Matrix Gateway by Matt Williams, TeachMusicRTC by Francesco Canessa and Filippo Oretti, and Kamailio Open Source VoLTE by Carsten Bock. You can see all TADHack mini pitches at YouTube playlist. I list the pitches in the order they were presented on Sunday afternoon.

Sebastian’s hack was built using Telestax Restcomm and Nexmo. It is a great demonstration of how open source and telecom APIs have revolutionized service development. Something that once cost millions and could take over a year to build, is now possible in 14 hours. This hack was a joint winner of Telestax prize, $500.

Neil’s hack was a great mash-up of the physical (individually addressable LED light strip) and using a Matrix room to control the LED lights. The applications of this hack are endless, e.g. corporate interactive signage , at parties, etc. Neil won the University College London prize of $1000.

These internet developers were wowed at the potential of WebRTC and applied it to their co-browsing service, they are looking forward to doing much more with WebRTC after their experience at TADHack. They were the joint winners of Kandy.io prize, $500.

TeachMusicRTC was an impressive combination of WebRTC and a number of JavaScript libraries that enabled tone detection. It enables remote music classes, where the student can follow the teacher on the keyboard. The demo worked perfectly downstairs, and then when brought upstairs to pitch the gremlins arrived. But that is what makes the pitches so intense, the chance of failure is high. They won the Google prize of $1000.

This pitch showed even the core of telco networks are going open source. This was a more industry focused hack, but we’re hoping for TADHack Global (at least in Lisbon) we can have a private LTE network to hack on, where developers can get in and play with the guts of the network. But more on that later.

Other hacks are described in Part 1 and Part 2 of this series.

A big thank you to everyone who gave their time, congratulations to all the winners, thank you to Ideal London for providing a great venue and Feast Food for the catering. Please register for TADHack Global 13-14 June, locations include Chicago, London, Lisbon, Madrid, Istanbul, Israel, Sri Lanka (Colombo and Jafna), New Dehli, Bangladesh, Indonesia, Australia, and the comfort of your home (remote). Plus we’re trying to line-up additional locations in Dubin and Rayleigh, North Carolina. TADHack is a new kind of event, it is not easy to pull off, unfortunately many marketing people struggle to understand its relevance. My request is to all the CxOs who see the relevance of what we’re doing, start innovating in your marketing and take part in TADHack!

Below are some of the weblogs about people’s experiences with TADHack mini London: