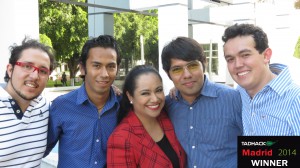 She is an international researcher in areas as e-business, e-commerce and e-marketing, and has presented at conferences in countries such as the USA, Germany, México; and has contributed to business development at IT companies in India.  She received international certification in Cybermarketing and another in BTL (Below The Line) marketing. She is consultant at the International center of competitiveness at Monterrey Institute of Technology and Higher Education campus Querétaro, and has been a professor in Entrepreneurship at this institution.

Arón Alanis, Ricardo Iván, Eduardo Espinoza and Erick García are students of Informatic Engineering at Monterrey Institute of Technology and Higher Education campus Querétaro, they have been awarded in the entrepreneurship areas, and Arón Alanis has founded his own company named Jadels, developing web and mobile strategies, and is takes part in Méxican conferences about entrepreneurship.

The project BMMCO, Big Markets for Micro Companies is a convenient platform to develop the commerce options for micro companies, and we were fortunate enough to be TADHack winners.